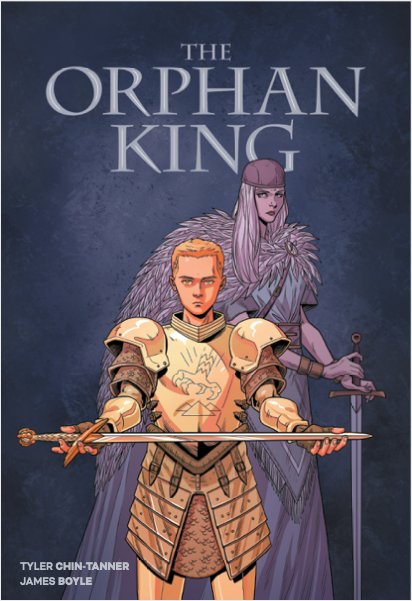 This month A Wave Blue World  publishes The Orphan King, a graphic novel with King Arthur roots. Publisher Spotlight interviewed the creator, and publisher, Tyler Chin-Tanner, on all things related to this welcomed launch. Here’s the transcript of our interview, with a big thank you for taking time from his busy life to share! The Orphan King‘s artist is James Boyle.

PS: Hi Tyler, thanks for taking time to share The Orphan King’s background as a graphic novel which you wrote and now celebrate publishing.  Let’s start with a thumbnail of this project.

TYLER: I’ve always been a fan of the King Arthur mythology. I grew up reading the books and watching the movies, and I’m sure it’s had a profound effect on my writing style and general 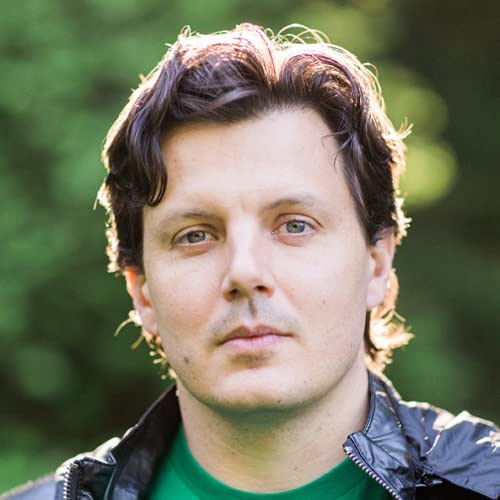 approach to fiction. That being said, I didn’t immediately gravitate to the idea of writing my own King Arthur story. So much has already been said, with many incredible works out there,  I didn’t want to just rehash that material. Then one day, a scene just entered my head. A boy returning home after his training, but he’s too late. His home is destroyed, and everyone he knows is gone. That was my way in.

PS: You run your own publishing company. How did you choose James as the artist you wanted for The Orphan King?  How did the story arc develop for you as a team?

TYLER: Funny you should mention my publishing company, A Wave Blue World, because the very first title we published was called Adrenaline and James was the artist. We were both right out of art school and I really liked his style. Working on that project was a huge learning curve, but we made it through to a produced a really worthwhile book, even if it was a little rough around the edges. We had been working on separate projects for a little while after that, but as soon as that scene that I mentioned earlier entered my head, I knew James was the perfect artist for an Arthurian-type adventure. I reached out to him and he was really into it.

PS: Let’s discuss thematic details of The Orphan King.  Who were the female role models, from life or literature or gaming or film, you brought to the project?

TYLER: It was important to me that The Orphan King had strong female role models. The Mists of Avalon was so influential to me. Marion Zimmer Bradley wrote the book from the perspective of the female characters. Specifically, it was the character Viviane, the Lady of the Lake, that influences the creation of Lady Taleissa in our story. She’s sort of a combination of the Lady of the Lake and Merlin.

PS: The Arthurian canon, too, is, of course, political from days of yore and resonates today because social dynamics sometimes revolve instead of evolve.  How did each of you discover King Arthur in your own story-seeking lives as kids? When did these stories become important to your own storytelling energy?

TYLER: My first exposure to Arthurian canon was through The Sword in the Stone, the Disney animated feature. Then I read Mary Stewart’s trilogy; The Crystal Cave, The Hollow Hills, and The Last Enchantment. In high school, I read The Once and Future King, by T.H. White. And as noted, I’ve read The Mists of Avalon several times.

PS: Give us some details about how you perceived these legends when you first met them and now reformulate them to address current issues like toxic masculinity.

TYLER: As much as I’ve always loved the King Arthur stories, it was always the element of “birthright” that didn’t sit right with me. I get that Arthur’s birth was orchestrated by a higher power and that he received special training from Merlin. That’s how monarchies work, but it’s hardly the ideal. I mean, why should we care who his parents were? Why should anyone be impressed that he was able to pull a magic sword out of a rock? What does that have to do with ruling? So those are some of the questions we explore in The Orphan King. Yes, Kaidan (our version of Arthur) is born from a king and he receives special training. But he doesn’t just inherit his kingdom and that’s that. Instead, he’s set adrift in this land he was meant to rule. He experiences life through the eyes of the common people and has to find practical solutions to the issues that plague the land. Oh, and he’s also got a price on his head and has to solve the mystery of who overthrew the kingdom in the first place.

PS: Tyler, your company, A Wave Blue World, publishes other comics, too. Several of them clearly offer stories with good chewy political spice and/or reference legends and lore. Tell us about your aspirational audiences these will find most friendly and welcoming.

TYLER: For me, writing is about sending a message to the world. We’ve always had a very global perspective at A Wave Blue World. Stories are about breaking down borders and connecting people. That’s what we’re trying to do here. It doesn’t necessarily have to be overtly political, some are more steeped in allegory. But if we’re not at least offering some insight on who we are as a people and what we’re doing in this life, I don’t see the point.

PS: And, with the graphic novel The Orphan King out late this summer, folks will want to know if either or both of you can be invited to address interested audiences, through remote programming, at comics-friendly venues.

TYLER: Yes, absolutely! We would love to discuss this book with whoever would like to hear more. I’m not doing many in-person events quite yet, but the great thing about virtual events is that they can reach audiences no matter where they are.

Thanks, Tyler! And welcome to the world, The Orphan King! 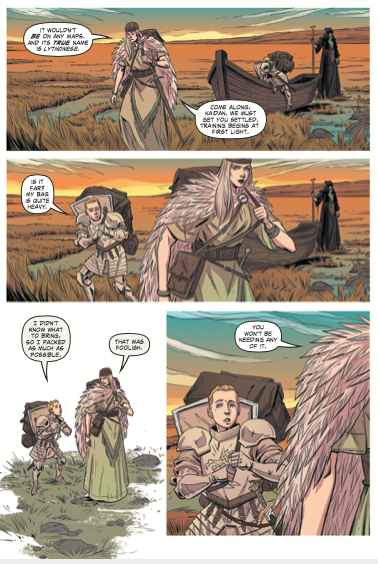