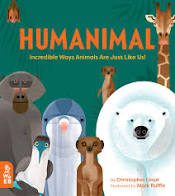 What the book is about: An illustrated showcase of commonalities between humans and animals in the fields of Community, Feelings, and Intelligence. Includes simple biographies on many animal scientists.

Four Activities for ages 4 to 8

Many insects are known for their teamwork and a group or hive mind. Bees are a great example of using teamwork to help their hive and how fun is it that they use dance to communicate? Ask your group of children demonstrate teamwork by playing the wiggle waggle dance game. In this game some children pretend to be bees and buzz slowly around the room visiting a variety of flowers that you have set up. Then, they pretend to take pollen back to the hive and wordlessly communicate, via dance, with other children bees about where these flowers are so that more pollen can be gathered. One variation with more adult leader interaction would be for the teacher to tell the children that specific flowers need pollinating and see if the children can identify those flowers.

Humans are not the only ones who have fun playing games. While we might not find the same game as entertaining as the animals do, we can have fun pretending to be animals. For a simple icebreaker game try Animal Sounds. In this simple game each child is assigned an animal, try for 3-4 kids having the same animal. Then they need to find the other kids with the same animal by making the animal noise or animal motions. Once they find their group, they can sit together and get to know each other.

For a group that already knows each other, the circle game Animals can be another way to have fun. Each child chooses an animal and is aware of a noise or action that is associated with the animal. If some of your children are shy you might want to help them select one. Then, everyone sits down in a circle with a “senior” seat to aim for. Think of this seat as the 12 o’clock position and each seat heading clockwise becomes more junior. The aim of the game is to get to that senior seat. The game starts with the child in the senior seat making their noise/action and then the noise/action of another animal. That second child then makes their own noise/action and the noise/action of a third animal. The round ends when someone makes the wrong noise/action or doesn’t respond within a time limit. That child moves to the most junior position (11 o’clock-ish) and everyone else moves up one seat. The game ends when your time is up.

Animals show feelings just as humans do. Some common feelings are love, anger, and grief. How do we show love? What do we do when we are angry? When are times we might grieve? Let’s express some emotions that animals might show through some yoga poses.

First up is love such as a polar bear would show her cub. Another animal that shows love would be the penguin. We can perform a variation of the Mountain Pose and pretend to be penguins.

A second common emotion is anger or showing aggression. Some good poses to showcase the animals in the book showing aggression would be the Giraffe Pose and Cat Pose. Allow the children to make sounds during these poses.

It is up to you to decide if you want to explore grief through yoga depending on your audience and how well you know them. Sometimes this can get tricky if too many emotions come to the surface. However if you want to try this, there are monkey pose and elephant pose.

Some of these poses are on the more advanced side and you can easily find variations online to make these simpler.

We used to believe that humans were the ones who solved puzzles but over time we have realized that many animals are also problem solvers. There are many types of puzzles from which you can choose for this activity, including jigsaw puzzles, tangram building, code breaking, etc. Pair up the children to work together to solve a puzzle you have provided. Alternately, if you have time to spend on this lesson, have the children create their own puzzle and then trade these with other children to solve the puzzles. You could introduce them to using a simple alphabet switch code or the classic tap code and talk about the ingenuity of creating such a code. Then, see if the children can create their own codes. 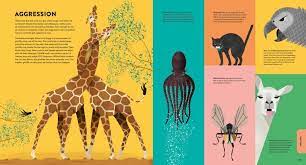